Meeting over two days, stakeholders of all backgrounds drew up the strategic approaches to ensure the success of BIODEV2030 in Burkina Faso based on Dr Oueda’s methodological approach, to assess the state of biodiversity and the threats to it, by examining and approving the constitutive texts of the multi-sectoral working group regarding the integration of biodiversity into the heart of Burkina Faso’s economic sectors.

The challenge: to restore and adopt sustainable practices to preserve soils and biodiversity

Located in sub-Saharan Africa, Burkina Faso has different ecological zones with a tropical climate that alternates between a dry and a rainy season. Irrigated by three tributaries of the Volta and by two international river systems, the river Niger and the river Comoé, the country is nevertheless still vulnerable to droughts and water shortages. It also has a number of dams and dykes to meet the water requirements of the urban population and irrigate crops during the dry season.

Burkina Faso’s different ecosystems provide habitats for a large number of species. However, they are extremely fragmented and subject to growing pressure from man, especially on land resources due to the increase in population density (urbanisation) and growth which are leading to increasing deforestation, the fragmentation of the habitat and overgrazing.

The threatened species and highly biodiversified habitats are mostly confined to the protected areas, as elsewhere in West Africa. The lion, the leopard, the elephant, the buffalo, the warthog, the antelope, the monkey, the hyena, the jackal, the hippopotamus, the crocodile, the boa, the varan, turtles and hedgehogs are among the typical species found in Burkina Faso. Other threats, such as uncontrolled bush fires, erosion by wind and water and the loss of the soil’s nutritive components are also affecting the local biodiversity.

In view of the current pressures on soils, flora and fauna, increasing the coverage of official protected areas for medium and large vertebrates is being considered, in order to slow up the loss of biodiversity in the country.

assessed (including 3 endemic ones)

The restoration of habitats has a particularly high potential for the survival of the species in the country.

Therefore, ecological restoration actions through the targeted reduction of threats from livestock rearing, non-timber annual and perennial crops (cash crops in particular) and from agricultural effluents have significant potential to reverse anthropic pressure on biodiversity in Burkina Faso. 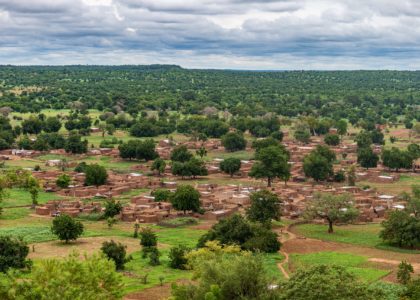 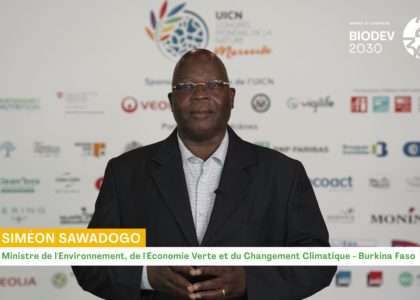 Video – Speech by Simeon Sawadogo, Minister of the Environment of Burkina-Faso (FR)