The launch workshop for the BIODEV2030 project kicked off the debate on biodiversity issues in Tunisia and in particular their integration into sectoral policies. Experts from the private sector, the banking sector, public institutions, the United Nations system, the Tunisian parliament and the research sector debated these subjects, sharing their knowledge, experiences and good practices. This workshop was introduced by Mrs Akissa BAHRI, Minister of Agriculture, Hydraulic Resources and Fisheries with the active participation of the Ministry of Environment.

The only North African country in the BIODEV2030 project, Tunisia has a wealth of biodiversity, both on land and at sea. Bordering both the Sahara Desert and the Mediterranean Sea, the country is characterised by the diversity of its natural landscapes, ecosystems and habitats. No less than 3,100 plant taxa have been identified, including 200 endemic species common to neighbouring countries in the region. Tunisia has seven major ecosystems with rich biological diversity, home to over 7,500 species: 3,800 species of land-based fauna and flora and 3,700 marine species.

The biological diversity of Tunisia is also reflected in the fact that it has 42 wetlands of international importance, as recognised under the Ramsar Convention. These account for 5.5% of the total surface area of the country. These ecosystems provide numerous ecosystem services, particularly in terms of water management:

However, since the 19th century, the environment in Tunisia has been subject to heavy human intervention: overuse of resources, poor regulation of illegal and damaging activities, and a lack of planning and coordination to protect biodiversity. This is resulting in significant biodiversity loss (drying out of groundwater, land clearing for agriculture, eutrophication, etc.).

The regions most threatened and disturbed by human activities are also those with a very low regional development index, such as the high steppes region.

According to UNEP, the agricultural sector is responsible for 60% of terrestrial biodiversity loss and 33% of land degradation. It is thus the main economic sector responsible for erosion of biodiversity in Tunisia. Its impact can be seen both on wild and spontaneous species and on domesticated species.

Wetlands are essential for the preservation of biodiversity, but also for the services they provide to humans. In order to combat the degradation of these environments, we need better scientific and geographical knowledge about their dynamics. In addition, better monitoring of the species present would improve our understanding about how the functioning of these sites changes. 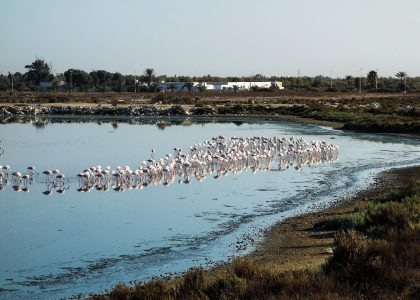