The national kick-off workshop for the BIODEV2030 project brought together about fifty participants to share the diagnosis of threats to biodiversity and to identify two key sectors for the next stages of the project.

In his opening speech, Mr Constant GODJO, Secretary General of the Ministry of Living Environment and Sustainable Development, reiterated the commitment of the Beninese government to the integration of biodiversity at all levels: “Each player is part of the solution. BIODEV2030 is an opportunity that Benin intends to seize to raise awareness among stakeholders to reverse the trend of biodiversity loss”.

Benin lies between the Niger River in the north and the coastal plain in the south. The low-lying southern plateaus offer a Guinean forest-savannah landscape. The Atacora chain, which stretches along the north-western border and culminates at Mount Sokbaro (658 m), consists mainly of savannah and semi-arid mountains. Southern Benin has an equatorial climate with four seasons, two wet and two dry, while the north alternates only between one rainy and one dry season.

In the north of Benin, the Pendjari National Park and the “W” Regional Park, which extends into Burkina Faso and Niger, are two of the most protected and biodiverse semi-arid grassland ecosystems in West Africa. The wildlife of the “W” includes elephants, leopards, lions, antelopes, monkeys, crocodiles and buffalo, as well as many species of snakes and birds. The original rainforest, which covered most of the south of the country, has been largely cleared. In its place, numerous oil palms and roasted trees have been planted and food crops are grown. The few remaining areas of rainforest are filled with tropical species.

The diversity of fauna and flora, which is more concentrated in protected areas, is still threatened by the increase in wildfires, extensive livestock farming, overgrazing, the use of pesticides, poaching, and agricultural expansion. Consequently, the main anthropogenic pressures affecting biodiversity in Benin are habitat loss, unsustainable use, overexploitation of resources, and pollution. These pressures are aggravated by climate change and soil degradation, which make flooding episodes near rivers more recurrent, while coastal erosion constitutes a heavy loss for the economy. Desertification in the northern part is another major threat to the livelihoods of people who have no other options.

assessed of which 5 are endemic

The promotion and adoption of good practices in the use of biological resources in the forestry and fishery sectors would benefit both terrestrial and aquatic ecosystems.

Fragmentation of ecosystems as well as various types of pollution could be minimised by actions in the agricultural and urbanisation sectors.

When it comes to reducing the risk of species extinction in Benin, threat reduction has four times the potential of biodiversity restoration. 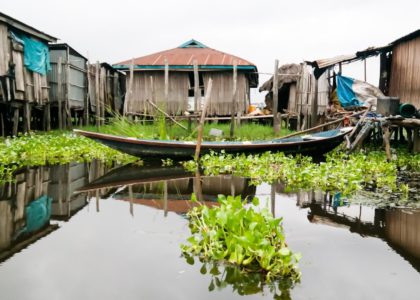