In attendance at the inception meeting of the project BIODEV2030 were representatives of project partners and stakeholders who were briefed on the objectives and work of the global project and how the process is being rolled out in Guyana. This was a splendid opportunity for attendees to discuss various sector impacts on biodiversity and to interact with the Biotope consultants entrusted with the task of conducting the National Synthesis Assessment. WWF is keen to have all stakeholders in the identified sectors onboard and look forward to working collectively in achieving the goals of the BIODEV2030 Project.

As part of the Guiana Shield Region and the Amazon Biome, Guyana enjoys a rich biodiversity, with 8,000 species of plant and 3,500 species of fauna. Rich of its endemism, approximately 60% of Guyana’s forests are considered primary forests, inhabited by 1,260 species of amphibians, birds, mammals and reptiles.

Three freshwater ecoregions have been identified in Guyana, noting that the Essequibo ecoregion is of particular importance as it serves as an important biological corridor connected to the Amazon Basin.

Guyana’s biodiversity highly contributes to the country’s economy both directly and indirectly, by providing goods and services necessary to growth and development. For instance, it is estimated that the export value of forest products was of US$37,9 million in 2018.

However, in 2013, 95% of foreign exchange earnings are the results of using natural resources and biodiversity, putting a lot of anthropic pressure on the neo-tropical bio geographical territory. Activities such as agriculture (mainly concentrated in the Northeast), mining, or oil and gas offshore operations lead to deforestation, coastal erosion, waterways contamination and landscape fragmentation. Ecological functions of ecosystems tend to be largely damaged and weakened in the long term.

forest loss due to mining infrastructures in 2019

of terrestrial biodiversity is considered vulnerable

In Guyana, ecosystems are unevenly affected by the various economic sectors.

Forests, coastal plain, freshwater and marine are the most threatened ecosystems by human activities in Guyana.

The development of the Oil and Gas sector can exacerbate the ecological threats posed by mining and agriculture. 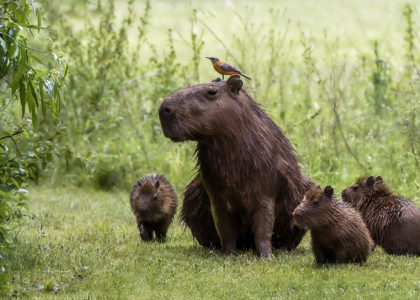